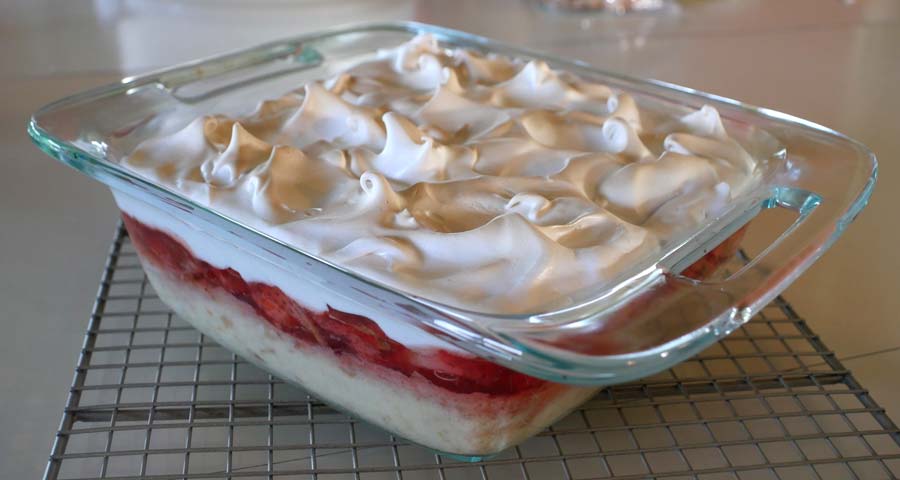 Watching past seasons of Great British Bake Off, I haven’t noticed a lot of vegan baked goods being prepared. Nonetheless, I am inspired when I see the amateur bakers making all sorts of things I have never heard of. One thing I still don’t completely understand is what defines a pudding in the context of Great Britain. GBBO’s Pudding week baffles me every time, but after seeing a Queen of Puddings on the show, I felt determined to make a vegan version of whatever this centuries old dessert is.

Not finding any “vegan Queen of Puddings” recipes searching the Internet, I looked at some traditional recipes and have adapted them into this vegan version. Despite never having sampled a Queen of Puddings for comparison before making this, I think this turned out well. The combination of a lemony cake-like base layered with fresh strawberries, and aquafaba meringue, makes for a tasty summer dessert. 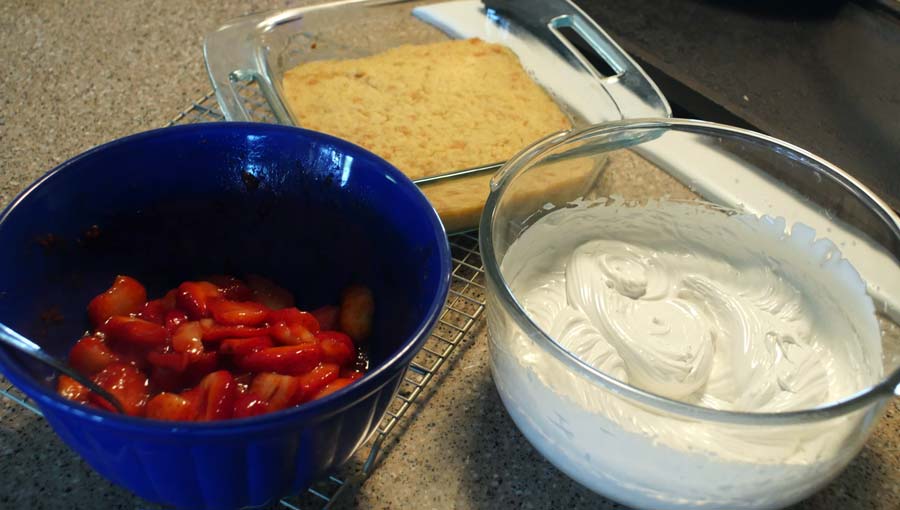 Prepare the bread by tearing it into small pieces. Then use a food processor to break it down into bread crumbs (about 3 1/2 cups of bread crumbs).

For the pudding, in a medium saucepan, stir together 1 1/2 cups of vegan milk, coconut cream, sugar, and lemon juice and zest. Bring the mixture to a simmer on medium-low heat, stirring occasionally. When the milk in the sauce pan is just starting to bubble, turn off the heat. Stir in the vegan butter and vanilla. Then stir in the bread crumbs and set aside the mixture while it cools and so the bread may soak up moisture (approximately 10 minutes). This is a good time to slice strawberries!

Pour the bread mixture into your greased baking dish, and bake for 30 minutes. The pudding should be firm when you remove it from the oven.

In a medium sized bowl, combine the jam and strawberries. When the pudding is cool, spread the strawberry mixture over the top.

To reduce the aquafaba, bring the chickpea liquid to a boil, then reduce the heat to simmer for approximately 10 minutes. Allow the mixture to cool to room temperature.

Using a stand mixer, beat the aquafaba at medium-high for 2 minutes until the liquid becomes frothy. Turn up the mixer’s speed to high, add the cream of tartar and vanilla, and slowly add the sugar. Beat until the mixture is stiff, can form peaks, and you can hold the bowl upside down without the mixture pouring out (10-20 minutes).

Scoop the meringue over the strawberry layer of the pudding. Using the back of a spoon, lift meringue in various spots to form peaks.

Bake the pudding at 250°F for 30 minutes. If you would like to brown the top, as a final step, place the pudding under the broiler for 1-2 minutes, keeping close watch of the process to prevent burning.

Serve warm. This pudding doesn’t hold up well for more than a couple hours!

One Response to "Queen of Puddings"