For the thirty-fourth Vegan Bake Club meeting our theme was pies, but because it was also December, we threw in a cookie swap. The night before the meeting, some of us got together to bake double batches of gingerbread and sugar cookies, so we would be prepared to ice and decorate treats at the gathering. 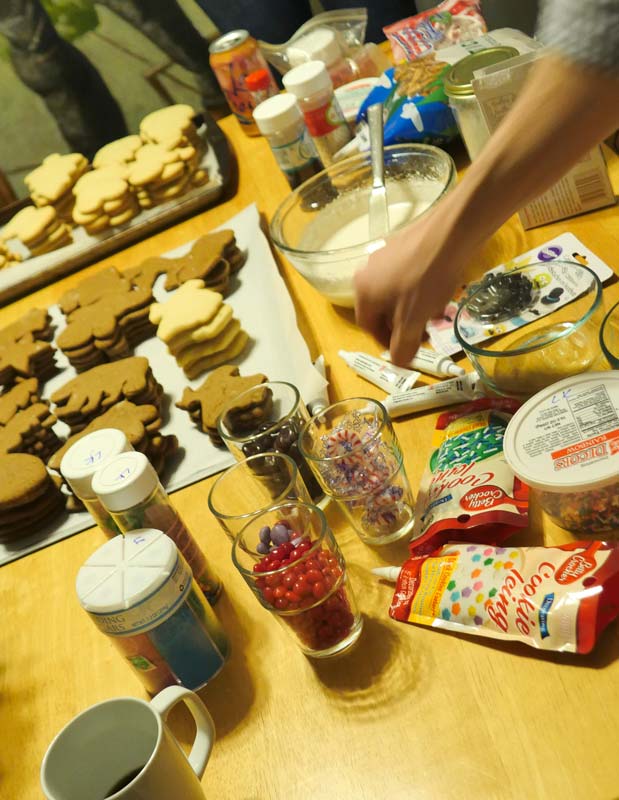 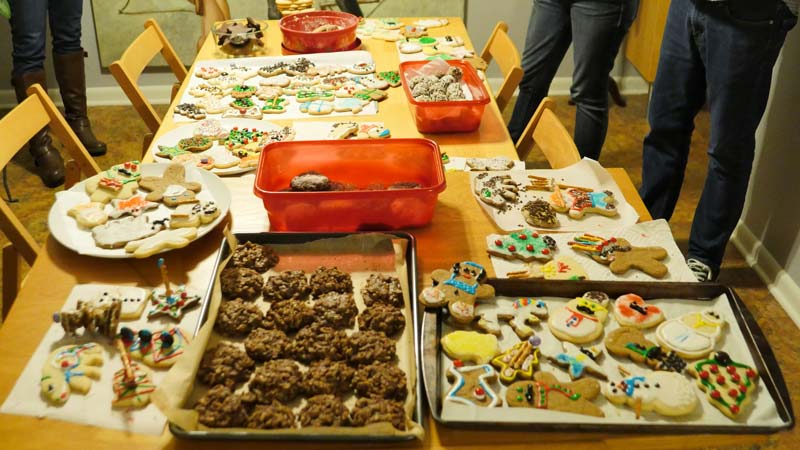 Here is what we decorated: 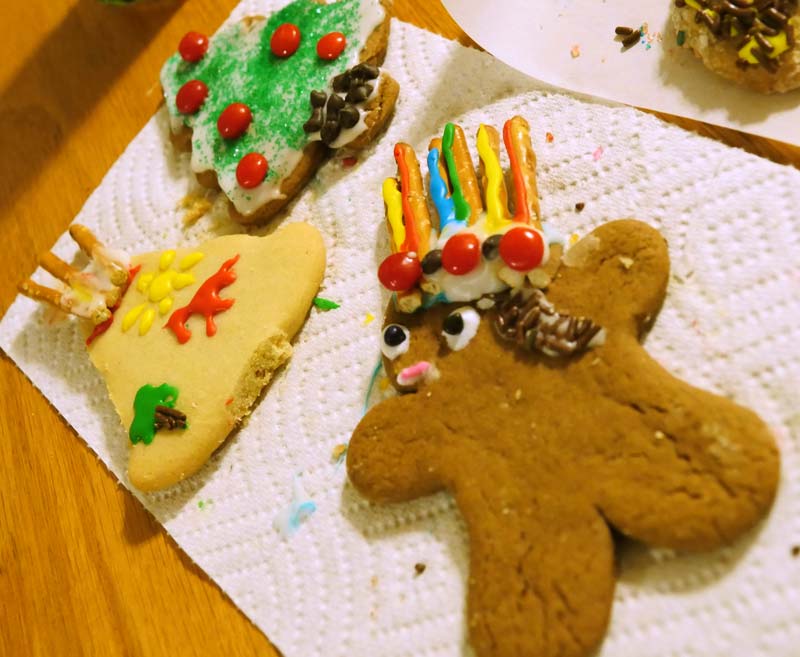 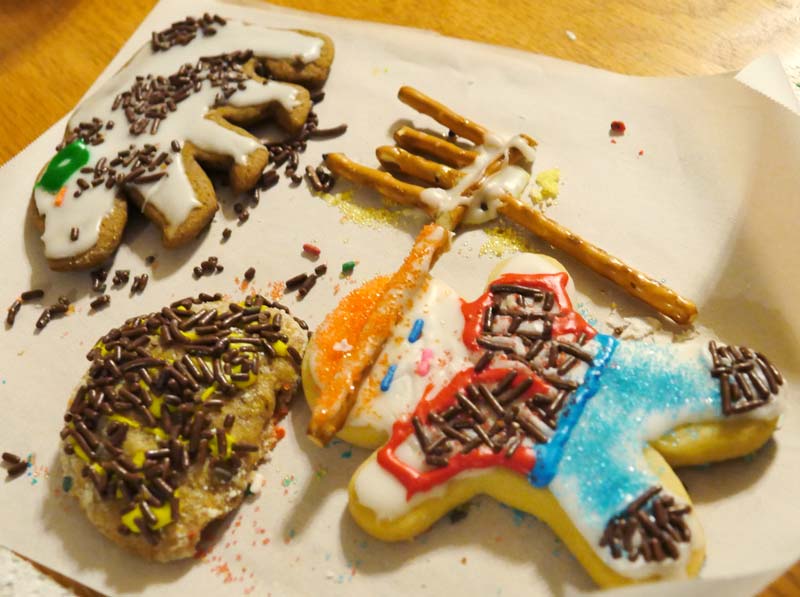 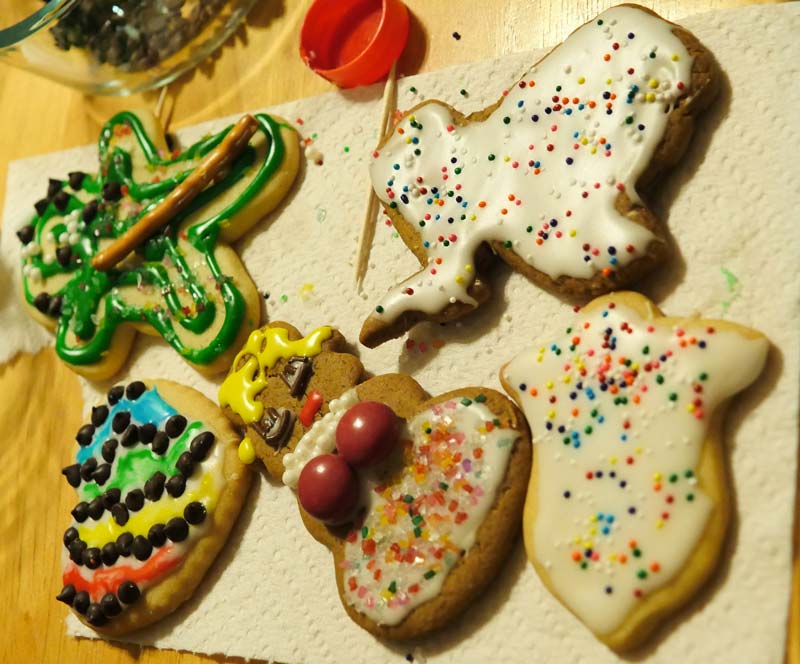 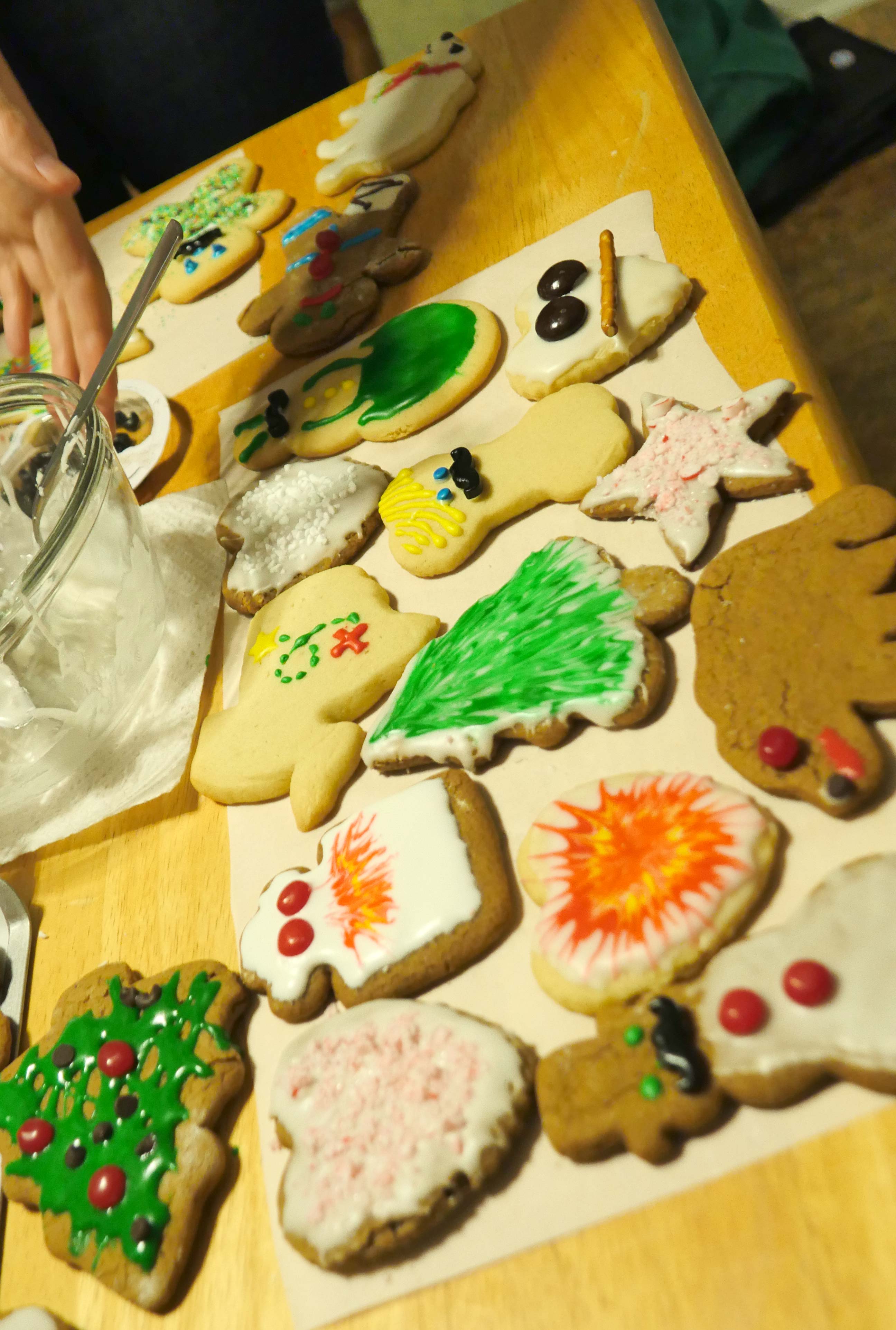 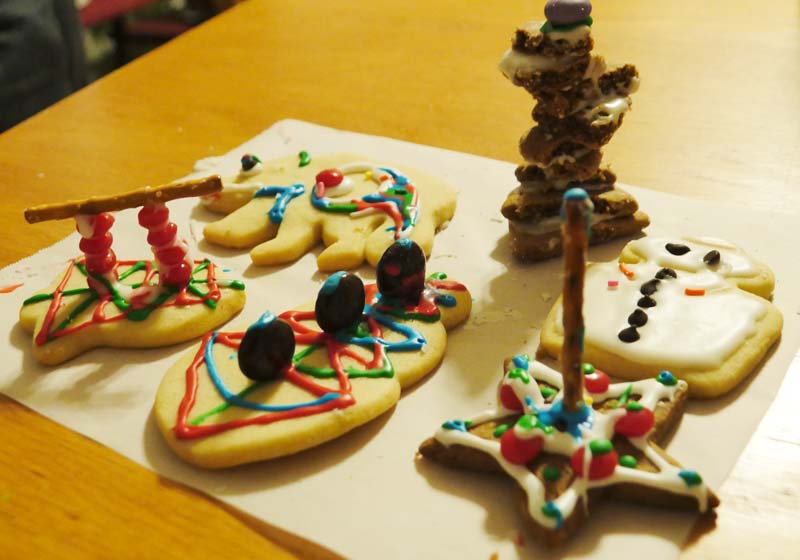 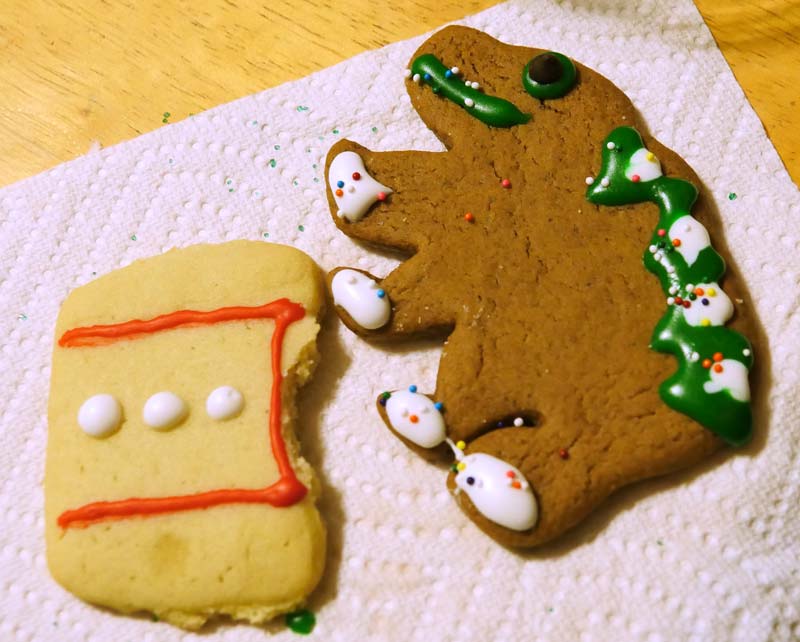 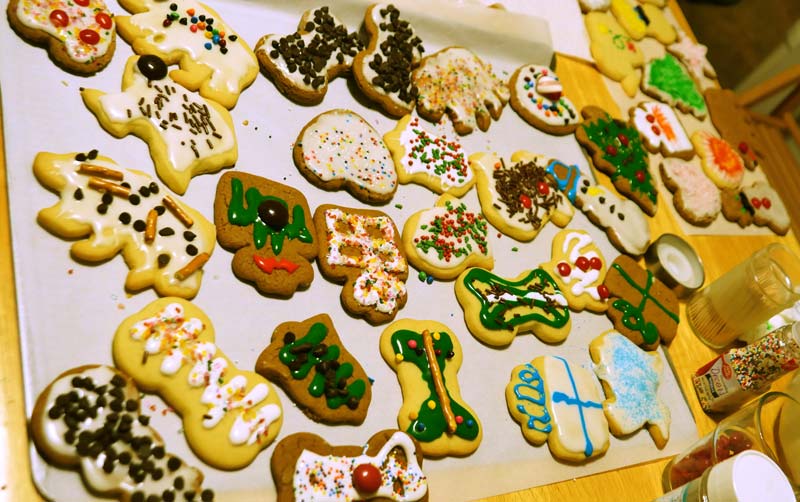 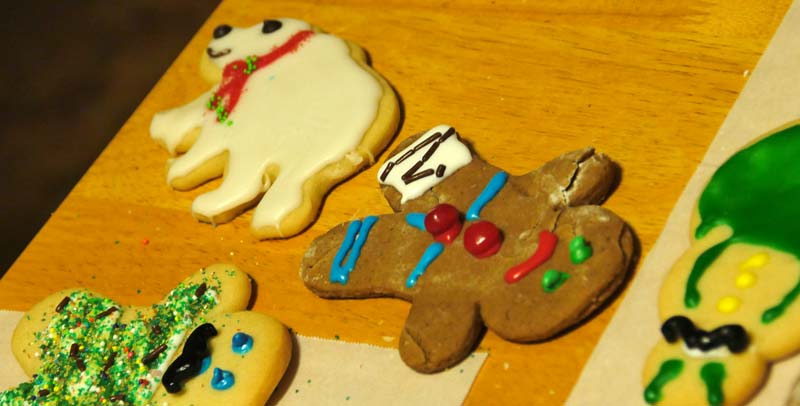 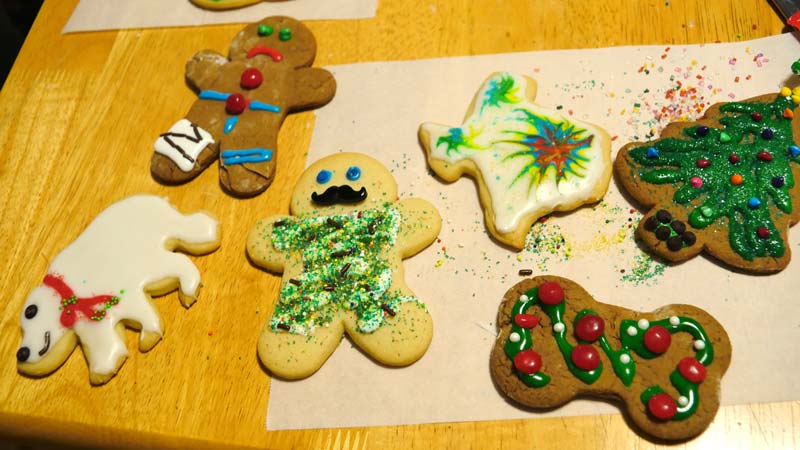 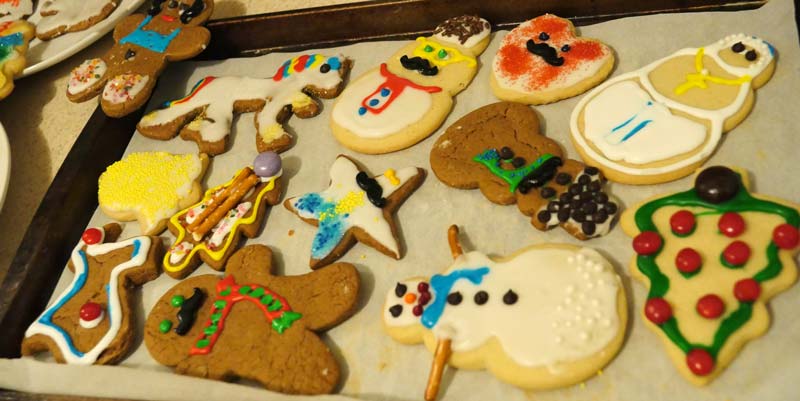 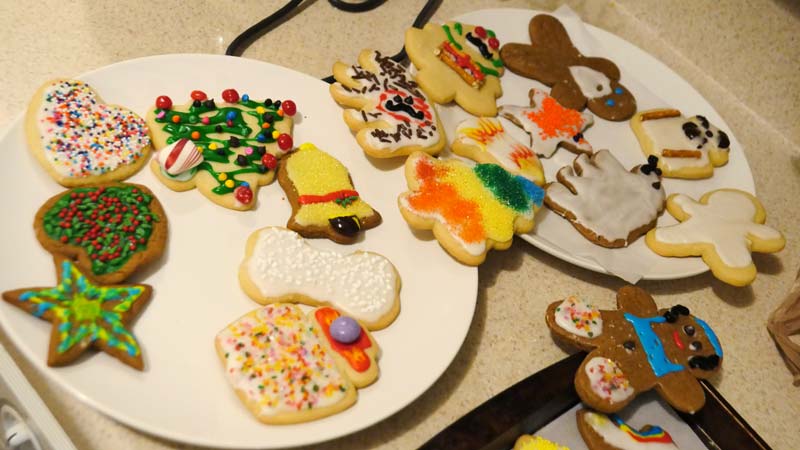 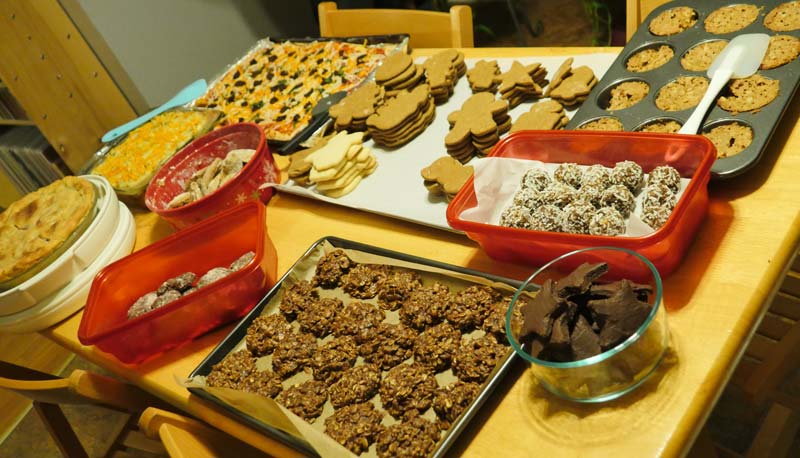 For her first VBC meeting, Shannon rose to the challenge of being tricked into making two items. For the pie theme, she made a perfect cherry pie using her family’s hundred year old crust recipe (shortening based) and red tart cherries. 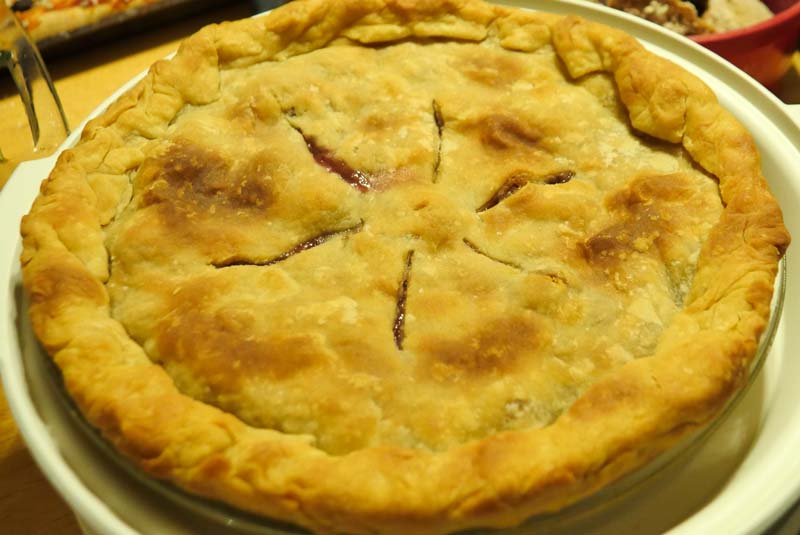 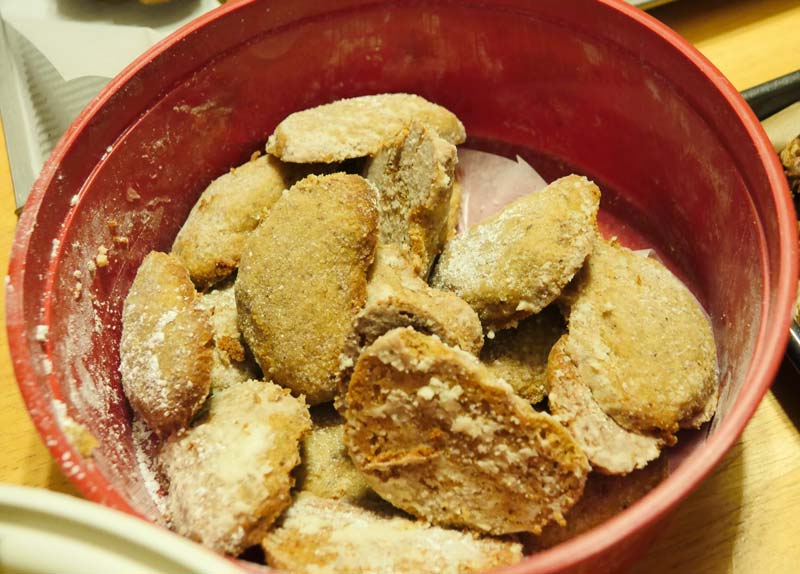 Brett, in from out of town, didn’t have a chance to make anything before the meeting. He did however decorate some cookies (see cookies on right). 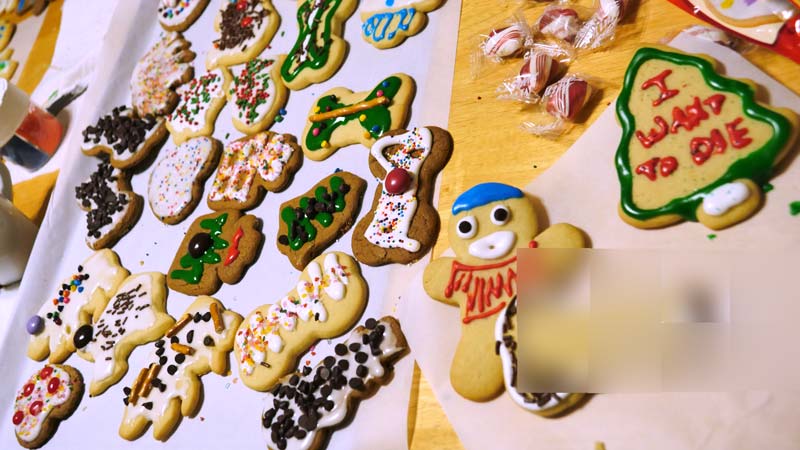 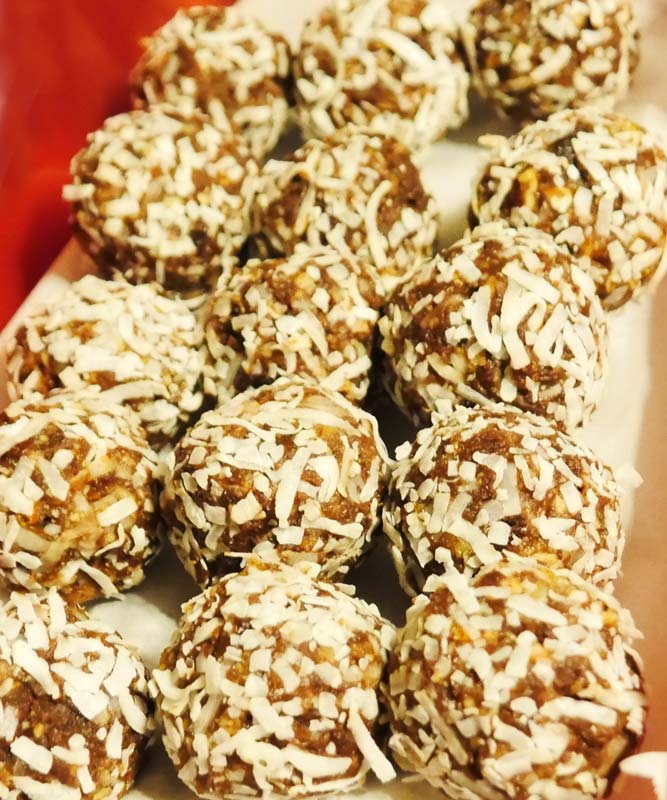 Slynn ran out of time to actually make a pie for the meeting with the dough she made. She did use the dough to make Gas Station Pies from the The 100 Best Vegan Baking Recipes cookbook some days later. She filled these hand pies with Fuji apple and frozen cherries and drizzled their tops with glaze. 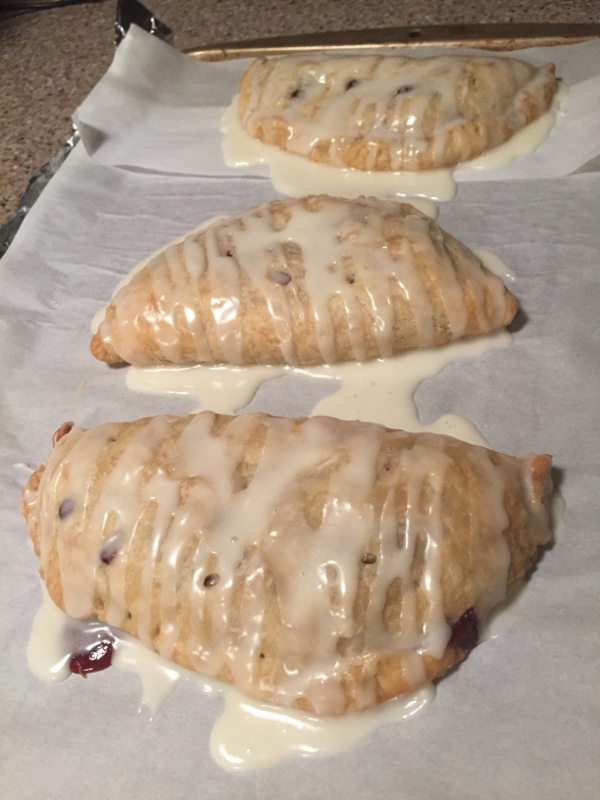 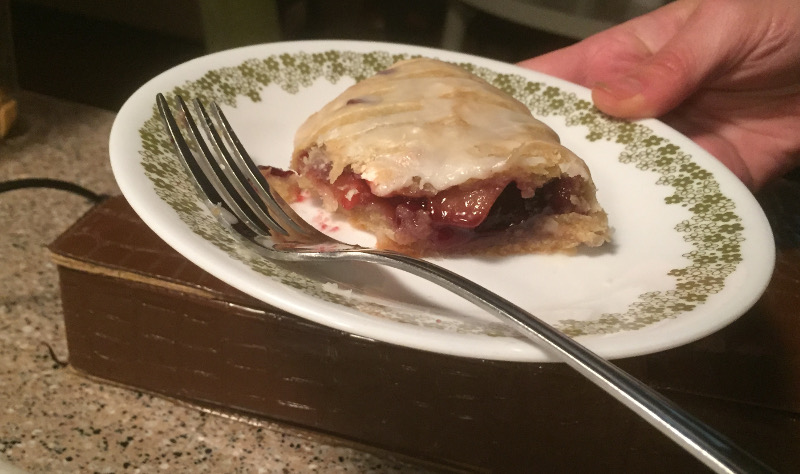 Ramon didn’t attend this meeting, but he did send along cookies for swapping. He made a cookie inspired by traditional crinkle cookies, but instead of topping the chocolate cookies with powdered sugar, he topped them with crushed peppermint candy powder. He also put pretzels in them. 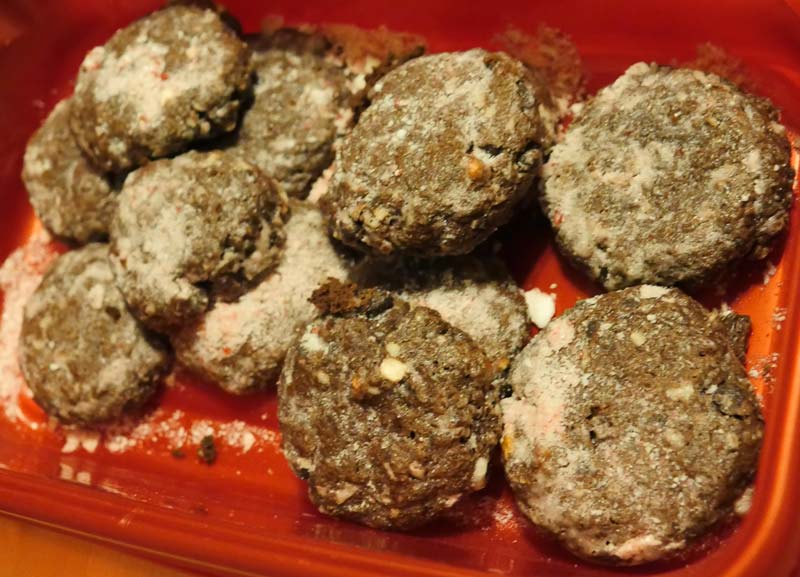 The first two vegan cheeses on Billy’s pie were Daiya Mozarella and Cheddar Style Shreds. He made the third cheese with byproduct nut meal from nut milk that Ramon has been making for his artisan coffee drink work. Billy took the nut meal, containing finely ground nuts, carrot, and dates, and combined it with homemade rye berry rejuvelac, canola oil, nutritional yeast, tapioca starch, and salt. He made a crust using his old Risen Bread recipe, spread on a thin garlicky tomato sauce, then layered on the three cheeses, and home grown basil. Strangely, the brown chunks that look like meat are Billy’s cheese. 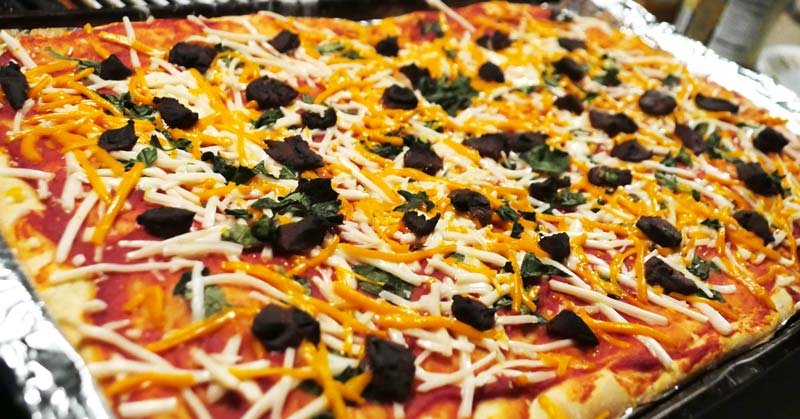 John made mini pies in a muffin tin. He made the Swedish apple pies with apples, oats, oat flour, sugar, cinnamon, and cardamom. On the side, he made a cashew cream sauce. 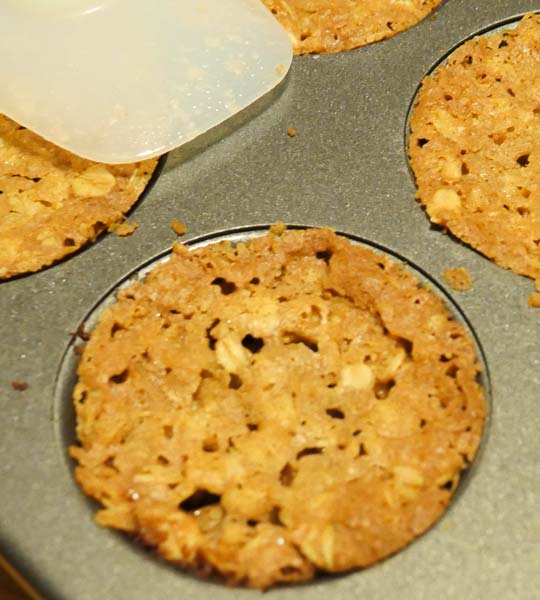 He made chocolate mint star cookies containing flour, brown rice flour, apple sauce, and less than standard cookie quantities of oil and sugar (though more than the healthy recipe called for) for the swap. To ice the cookies, he placed 4 chocolate chips on each cookie while still warm, spreading the chocolate across the cookies as it melted. 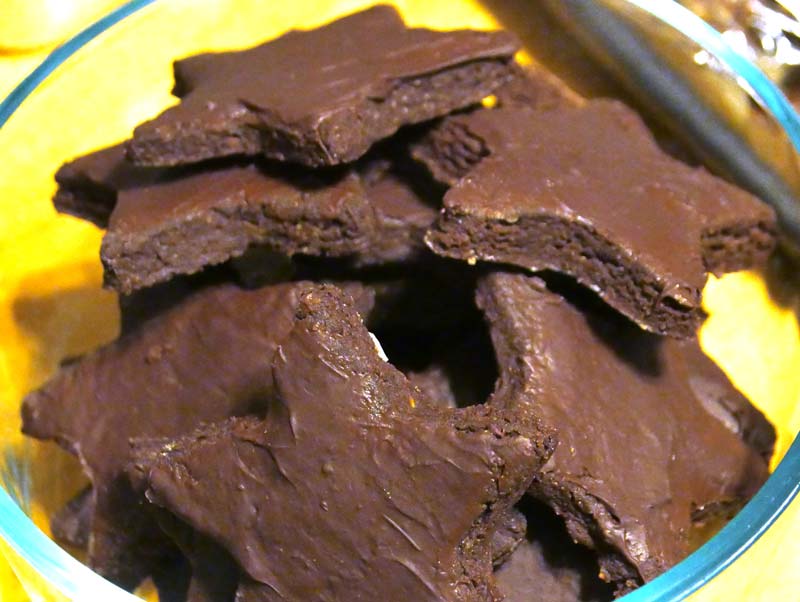 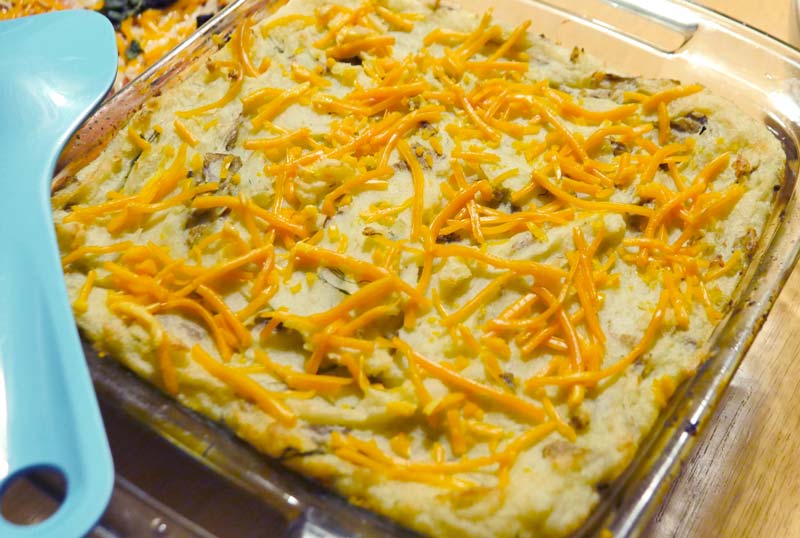 For the cookie swap, Lauren put together some No Bake Cookies with ingredients including cocoa, oats, sugar, peanut butter, sunflower butter, and vanilla. 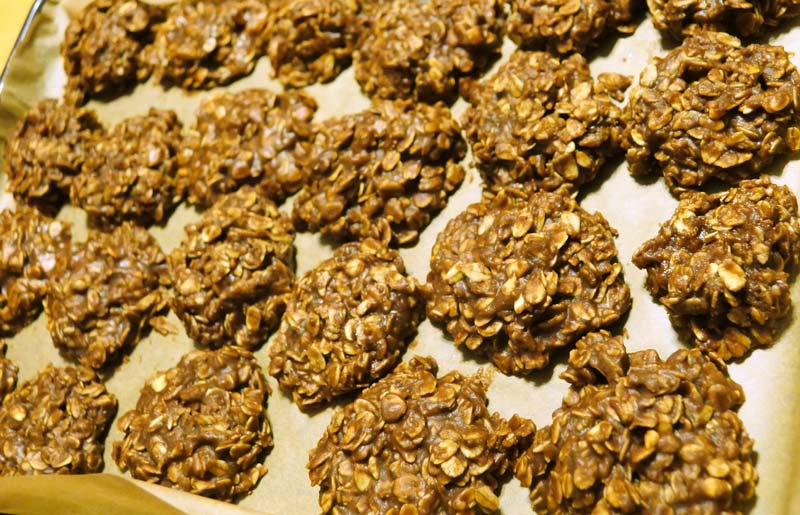 Michelle made a vindaloo pie in a cast iron skillet for the meeting. She used a jarred vindaloo sauce, onion, garlic, potatoes, peas, radish, tofu, and coconut cream. First, she cooked the potatoes down a bit, then added onion and garlic and cooked it with some curry spices. She added the vindaloo and coconut cream with the veggies, topped with crust, and baked it for somewhere between twenty and thirty minutes. For the crust, she used a basic pie crust with part coconut oil for the fat. Unfortunately, after concocting this beauty, she didn’t actually make it to the meeting. She was able to show it off to us after we met up for brunch the next day though! 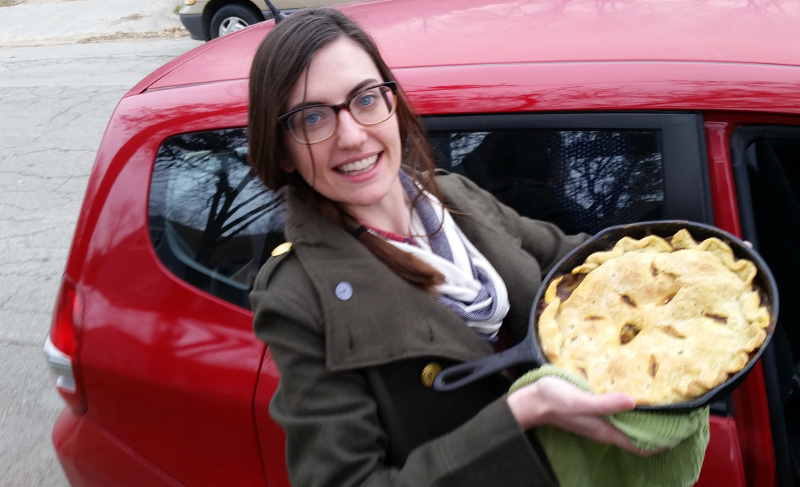 We finished the evening with some mah jong. 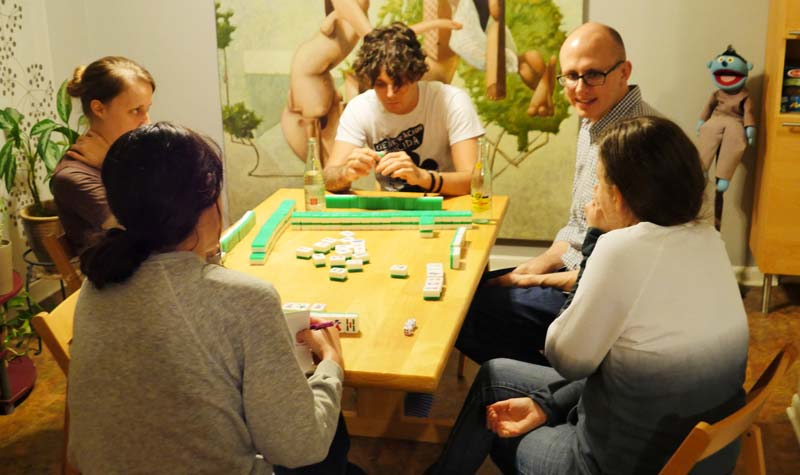 John has a nice vine window. 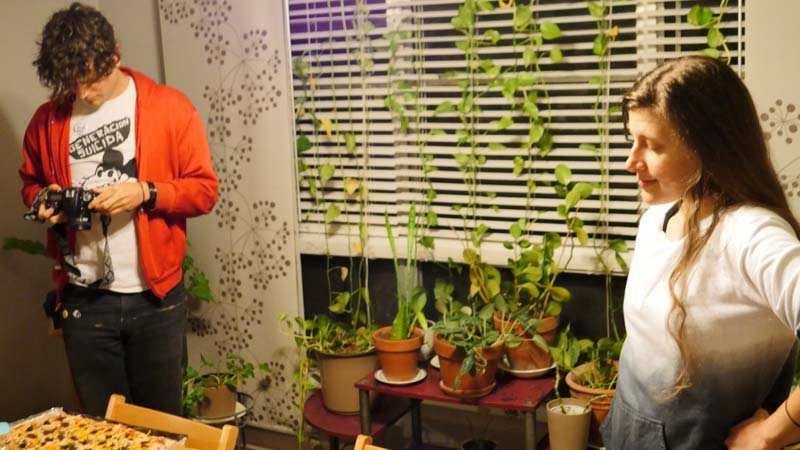