What is the Draw Two theme? Back at our November meeting we each drew two ingredients out of a container to be used in a recipe for this December meeting. This was decided to be the theme after my idea of us constructing a human body out of baked goods was quickly deemed undesirable.

Extending the theme of drawing ingredients for a recipe, this meeting we had a cook off activity with random ingredients. VBC broke into two teams, and each team drew three ingredients out of a hat that had to be incorporated into a recipe of their own devising. Teams were given 40 minutes, which was later extended to 50 minutes, and then Team Stinkle stretched it to an hour. 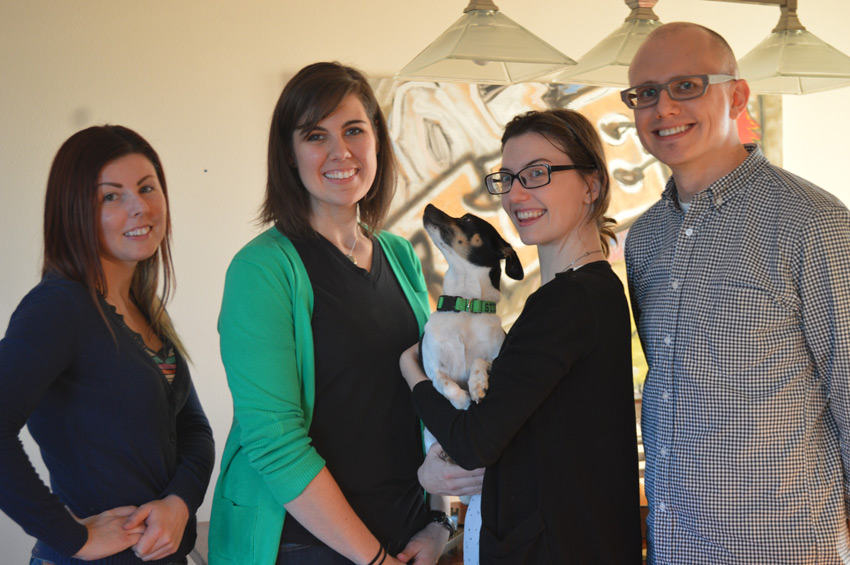 They found that their ingredients lent well to a holiday themed cake. 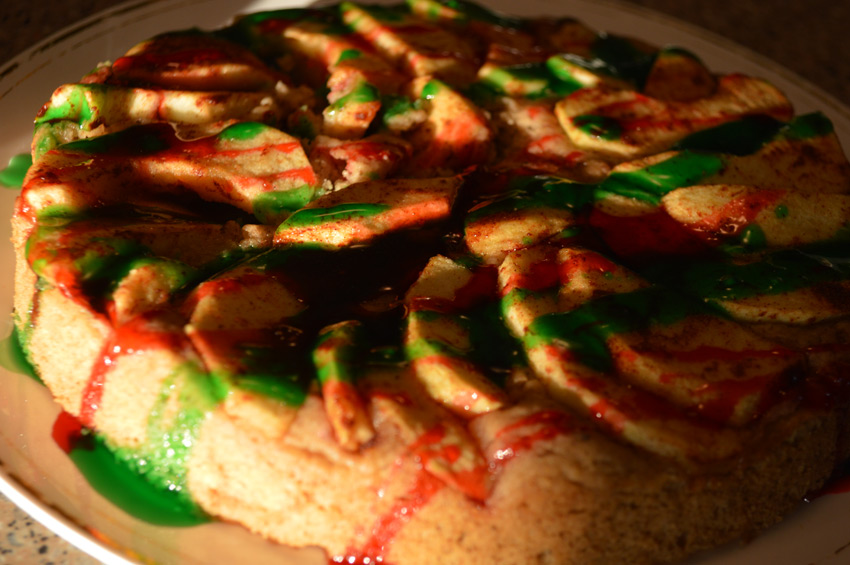 As the judge of this “competition” I was impressed that instead of just sprinkling the top of the cake with any of the kitchen’s ridiculously overly large store of a variety of sprinkles, Team Stinkle melted some down with water and cornstarch to make brightly colored syrups, the green reminiscent of Troll 2. 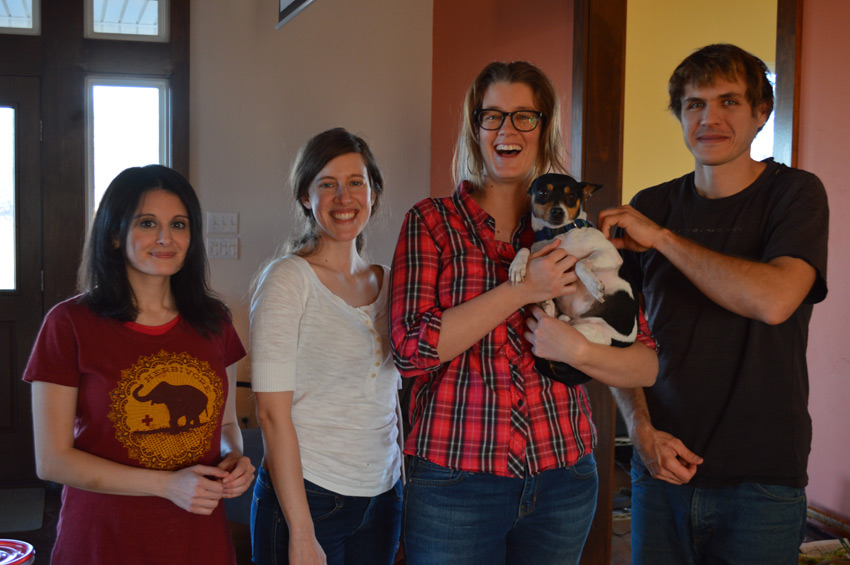 The theme for Team KoKo’s creation might have come from Slynn’s inspiring quote, “I already baked something today; I don’t want to work hard. Don’t quote me on that.” She bakes and cooks a ton. Team KoKo came up with a descriptively named Chocshewkin Smudding, their ingredients being canned pumpkin, cashew, and dark chocolate, and the result being something between a smoothie and a pudding. 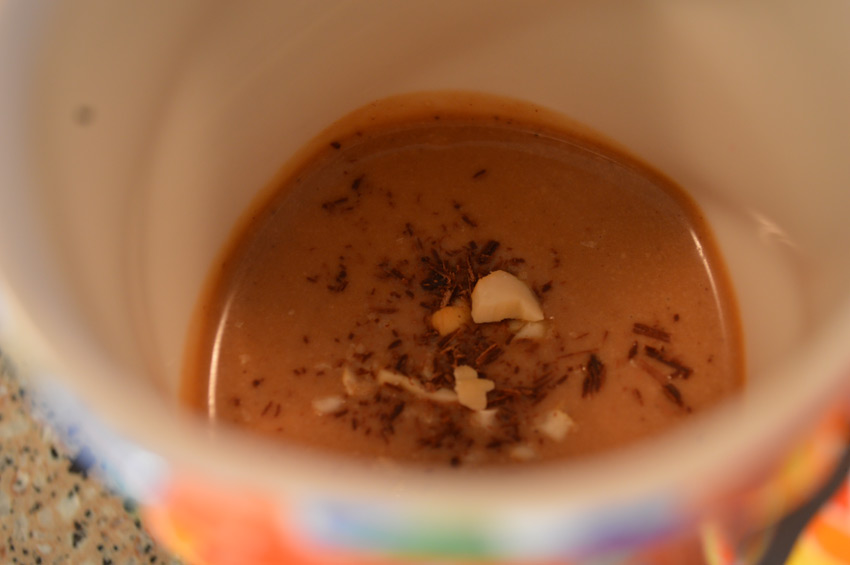 Despite me springing this activity on people without warning and there being a [loose] time limit, both treats turned out impressively tasty. I was supposed to pick a winner, but after going back and forth based on the various goods’ aspects, I asked the team members to choose. Other than John, who adamantly defended the superiority of his team’s cake to the end, people decided since there was not a clear winner, it should be a tie.

Here is what we made for the Draw Two theme:

Made with whole wheat flour, we could feel like we were eating a health cake. A healthy cake with lots of sugar and rum. By Trista’s precedent, I would like to try some whole wheat flour baking in 2014. 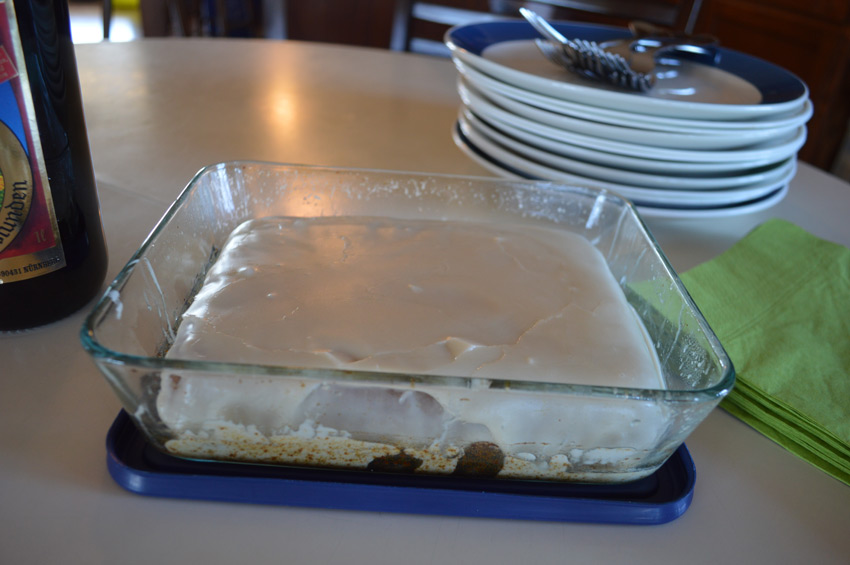 Mini loaves are very cute. With oats on them, they are little darlings I want to kiss. Pumpkin, apple, and cashews have a high level of flavor compatibility. 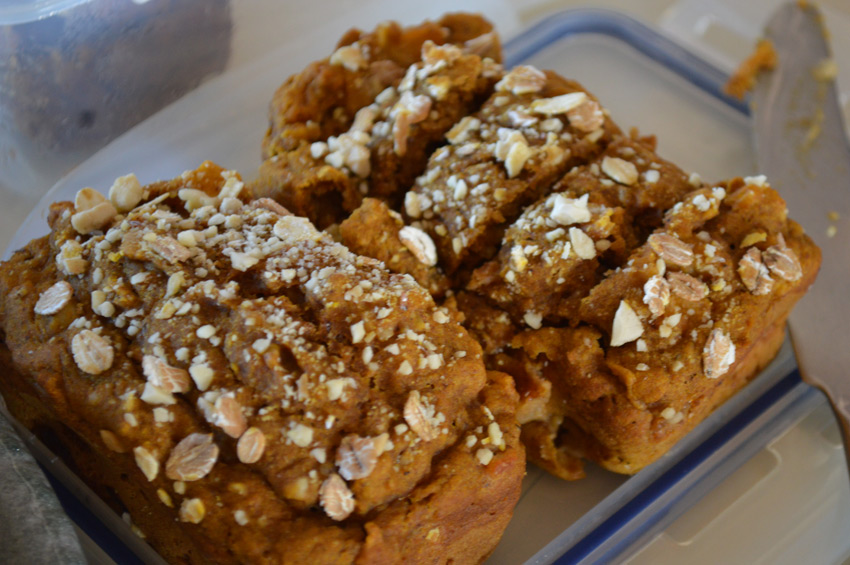 This is another in Billy’s many nut cheese experiments. The nori worked well with the lemon and non-invasive tasting almond base. He puts these “wheels” in a dehydrator to make them firm and sliceable. To serve with his cheese, he made crackers using his lemon and nori ingredients. 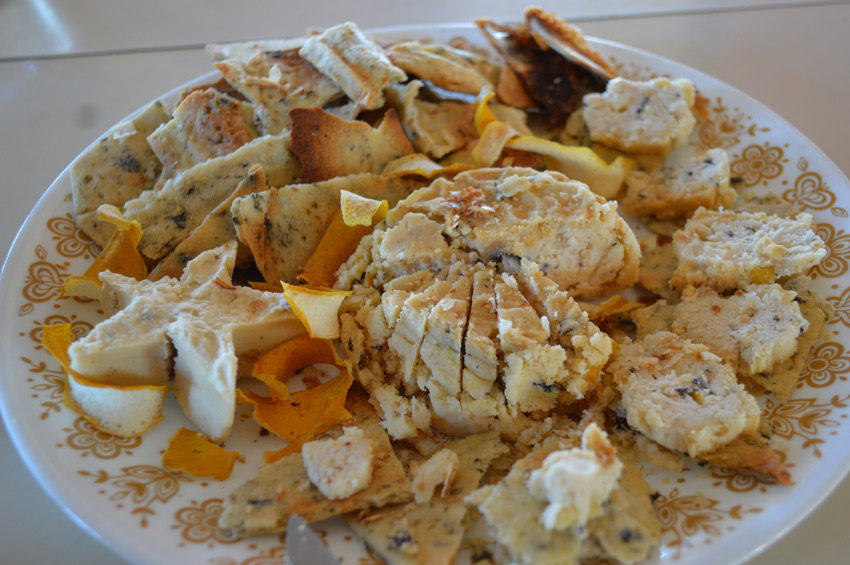 Slynn made a traditional German Christmas cookie, vegan style. She used her assigned nutritional yeast ingredient sparingly, but even a little more wouldn’t have hurt the flavor of these spicy cookies that contained cloves and black pepper. She also used anisette sugar (sugar flavored with anise). Pfeffernüsse-Pfeffernüsse-Pfeffernüsse! 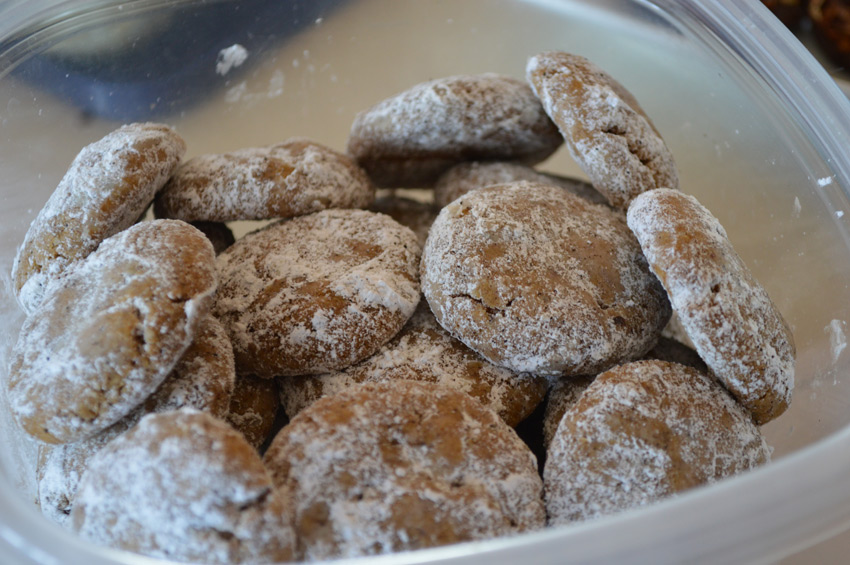 Spicy, fresh, healthy, delicious. Alesha initially planned to make miso soup but changed her mind before the meeting, thinking it would be too obvious. Instead she wrapped a blend of yams, ginger, miso, garlic, cayenne pepper, and (if I remember correctly) edamame in raw collard greens. These could be on the menu as an appetizer at P. F. Chang’s. Just kidding. They are way beyond that. 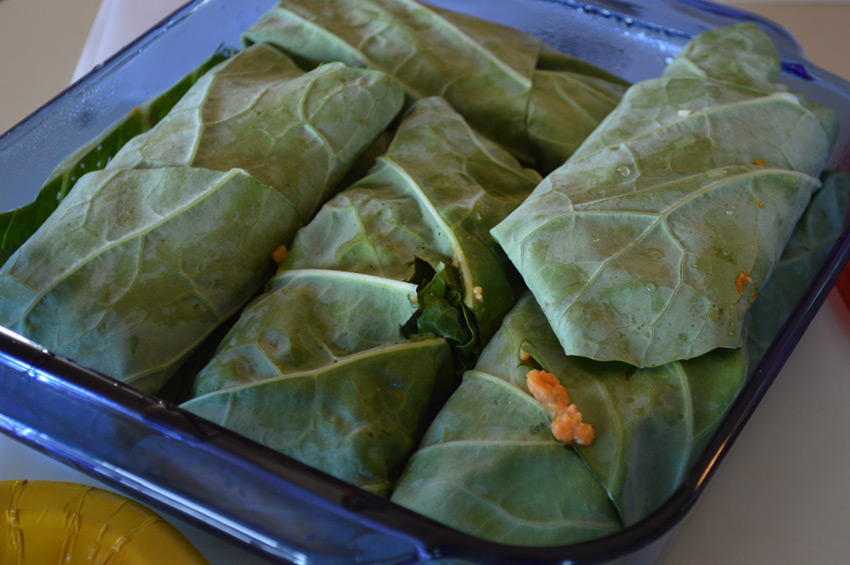 Thinking of them as a pair, sour cream and peanut butter don’t sound like the most appealing couple. In a baked good though, vegan sour cream becomes a depth of flavor and texture that can enhance many things. Eating these baked cookies was almost like eating cookie dough for how soft and moist they turned out. 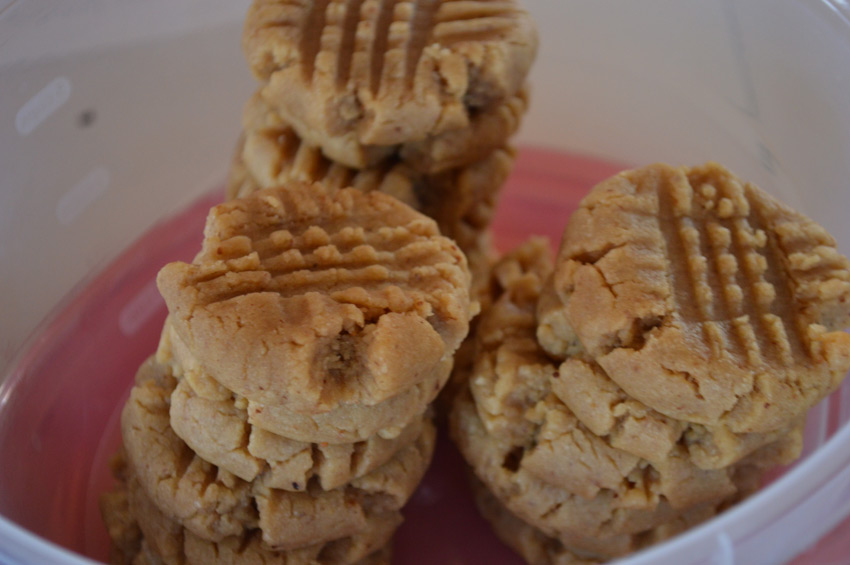 Often used as a chocolate substitute, carob maybe unfairly gets stuck into a hole as chocolate’s creepy cousin that people don’t really want around. So let’s not think of them as a chocolate stand in, but as their own thing. It’s kind of good. Lilly melted the carob with cranberries and sugar that she ribboned into the muffins. Ribbons of stuff in baked goods are one of my favorite things to find. Plus, Lilly baked for this meeting! 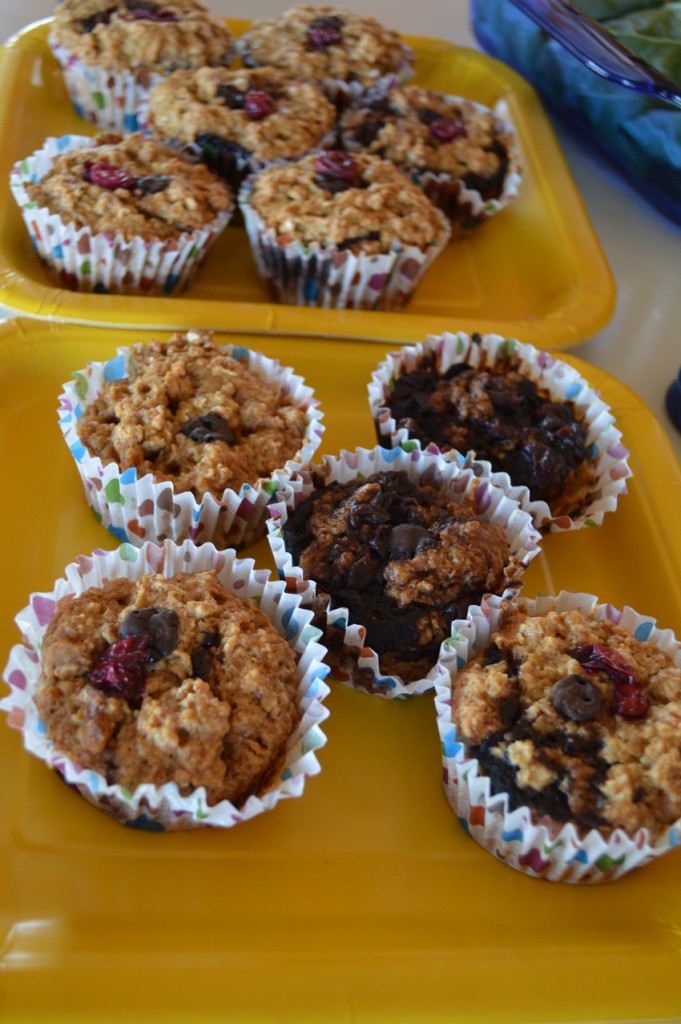 I baked the cakes once and sometime after midnight realized I forgot to swap out some of the regular flour for the coconut variety, so I baked them again. Looking at the bright side, it was a good opportunity to see how coconut flour affects a baked good. The coconut flour takes up more liquid, so I added extra almond milk to the batter. The finished cupcake was slightly denser, with more body. I plan to use coconut flour as 1/4 the amount of all-purpose flour in many future cakes. 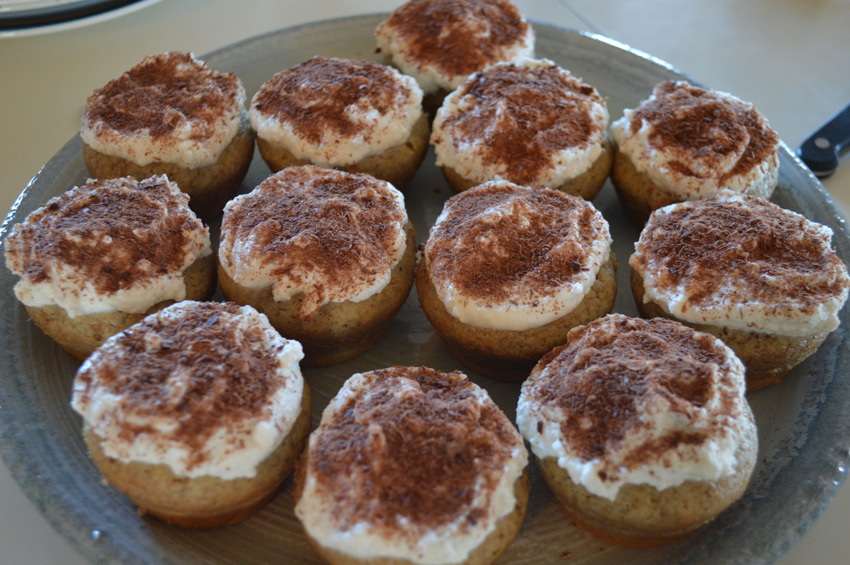 I can’t remember what Michelle’s second ingredient was because the main thing I recall about her explanation of what she made was that she didn’t feel like spending the money on us to buy straight cacao or her other ingredient. We accepted her chocolate disks however, because of the savory sweetness of the chocolate, coconut bacon, whiskey pecans, and dried cherries. These disks sparked a discussion about how to temper chocolate and the usefulness of candy thermometers. 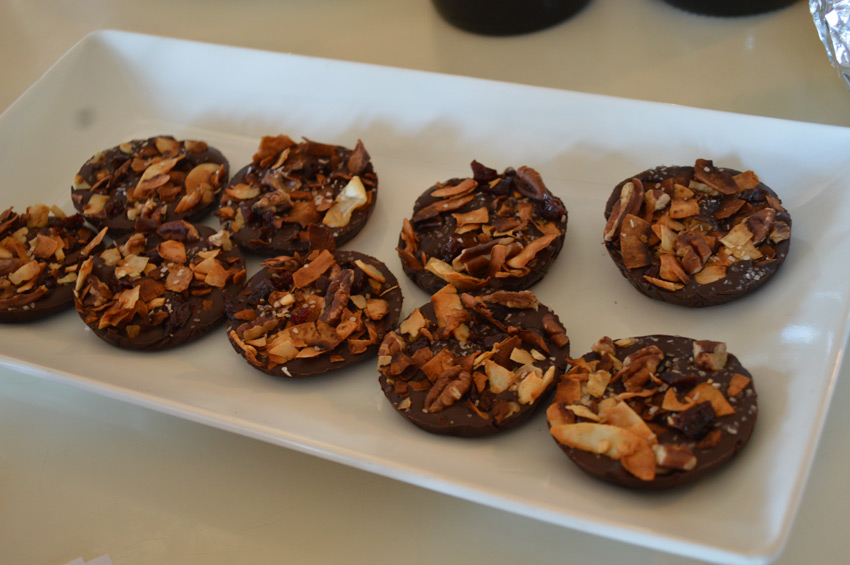 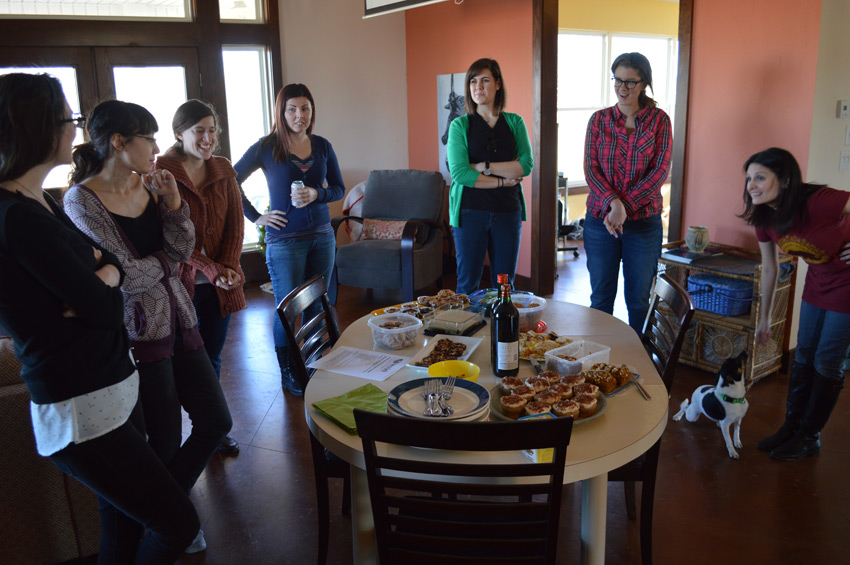