Our 55th meeting was a soul food theme with lots of warm and hearty dishes plus two banana puddings! 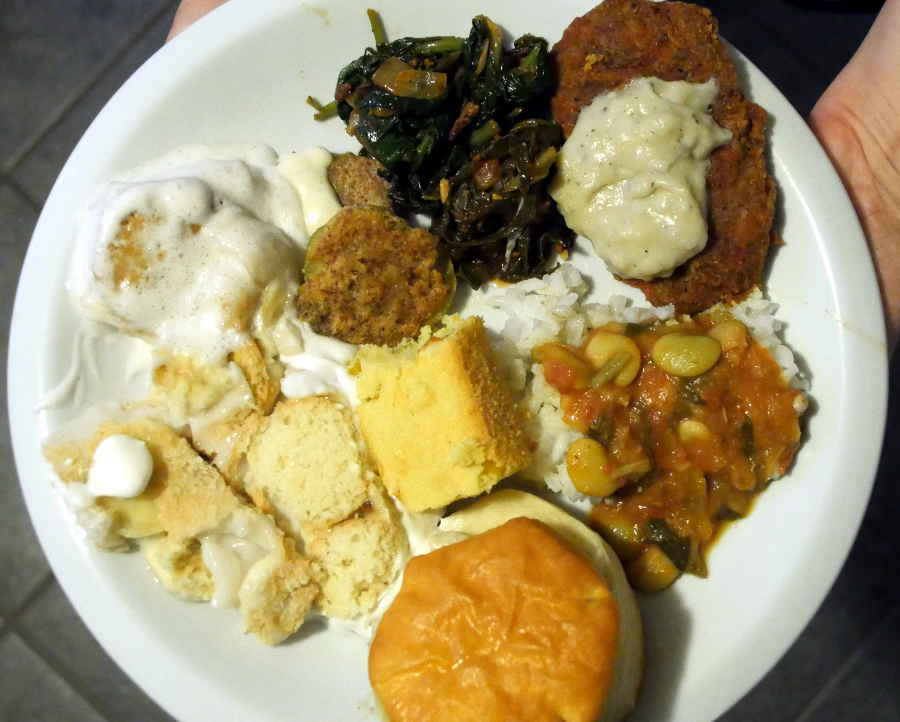 Lauren made a seitan steak using this vegan country fried steak recipe with wheat gluten, pureed pumpkin, garbanzo bean flour, and spices. Rather than using that recipe’s crispy coating, she opted to make a batter from a vegan fried chicken recipe with all-purpose flour and a creole blend of seasoning. For the coating liquid she used almond milk, flax egg, and more creole style seasoning. She fried the steaks in canola oil. She served the entrée with a gravy consisting of almond milk, garbanzo and all purpose flours, nutritional yeast, garlic powder, onion powder, salt, black pepper, and nutmeg. 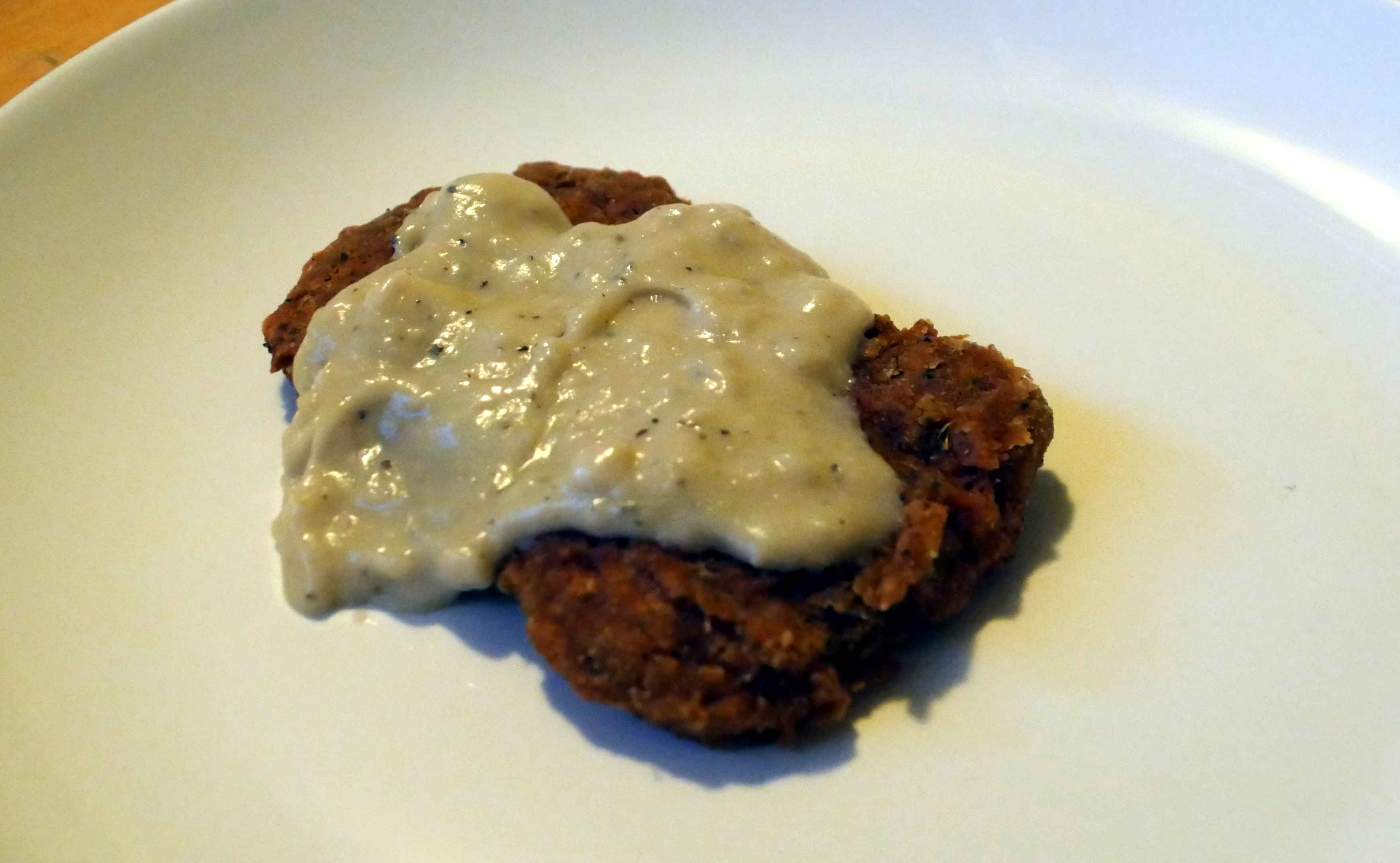 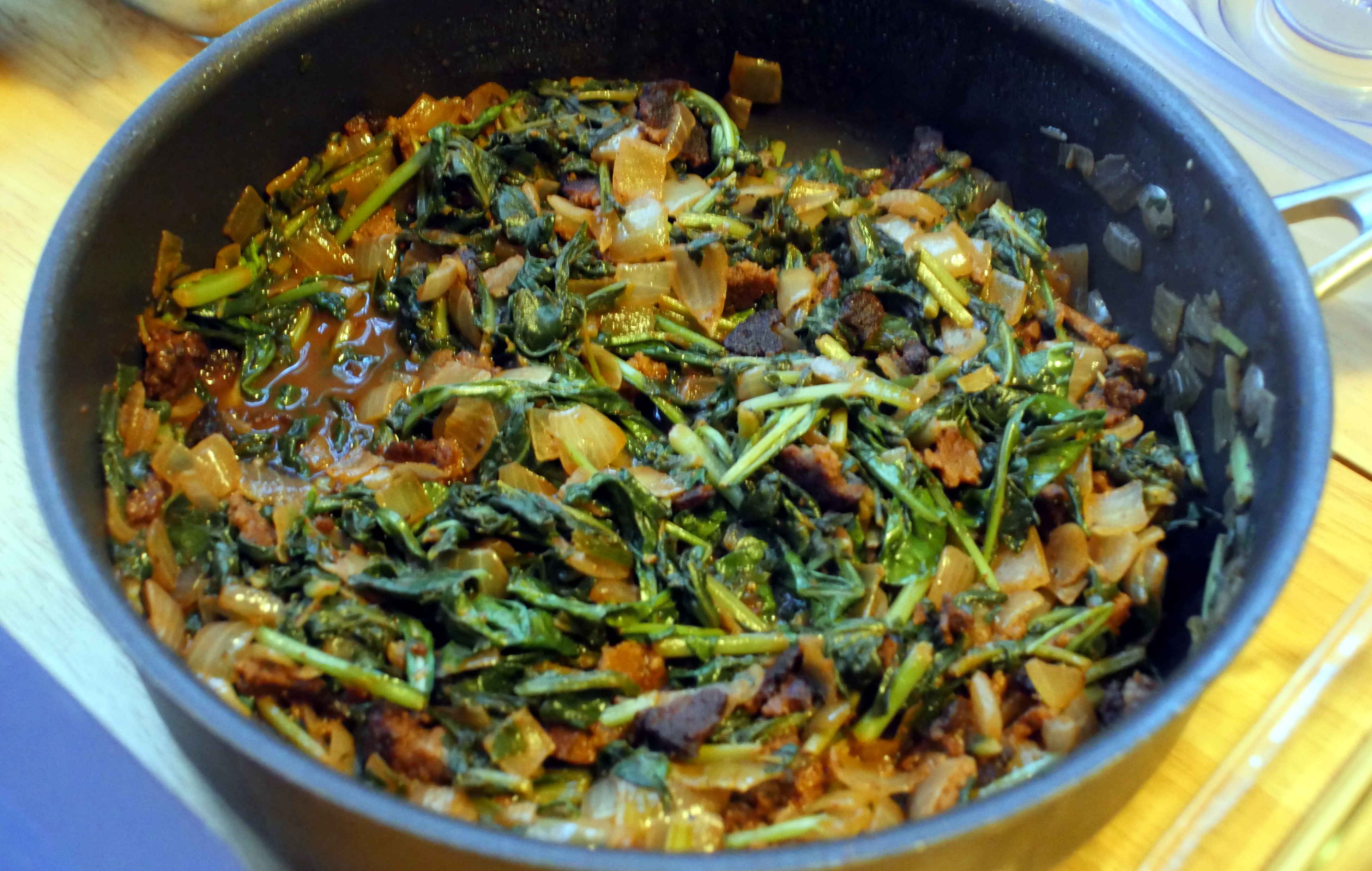 Caroline coated sliced dill pickles in a blend of almond meal and tapioca starch mixed with water, spiced with garlic powder, onion powder, cayenne pepper, salt, and pepper. She started shallow frying the pickles with coconut oil but switched to canola oil because the smell of coconut and pickles was freaking her out. She served the pickles with a side of Daiya Homestyle Ranch Dressing. 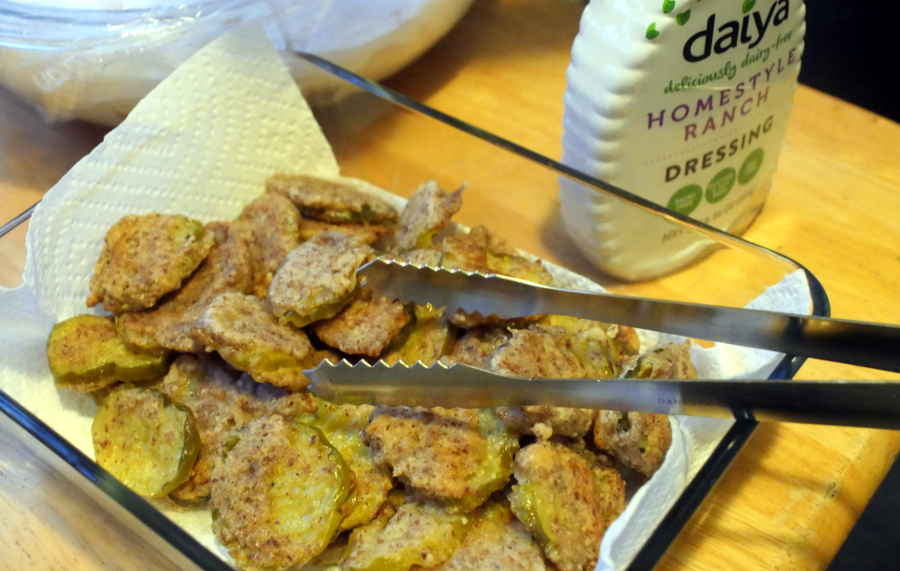 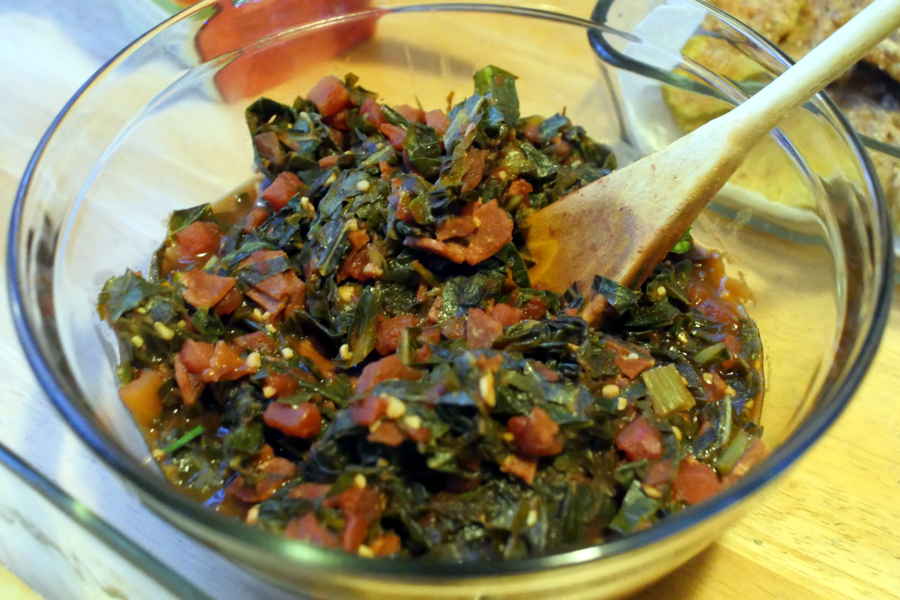 Shannon made a vanilla pudding with almond milk, a can of coconut milk, sugar, corn starch, and salt. She layered it with Sprouts brand vanilla wafers, bananas, and whipped cream on top. Initially she tried to make a vegan whipped cream with a can of coconut cream, but since the can turned out to be a dud (too much water), she used So Delicious Cocowhip! (the original full fat kind). 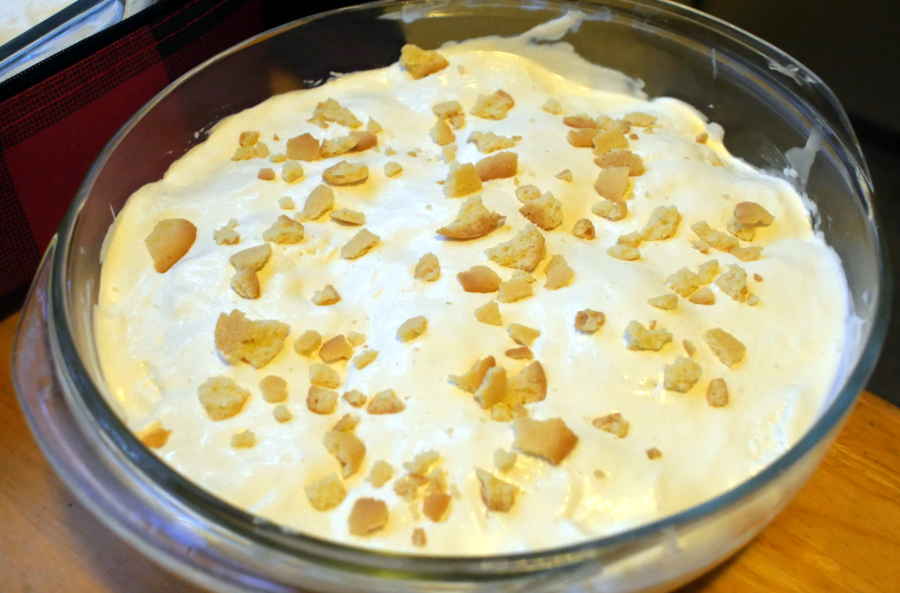 She also brought some prepared biscuits out of a tube that she also got from Sprouts. These were good enough to quest for in the future. 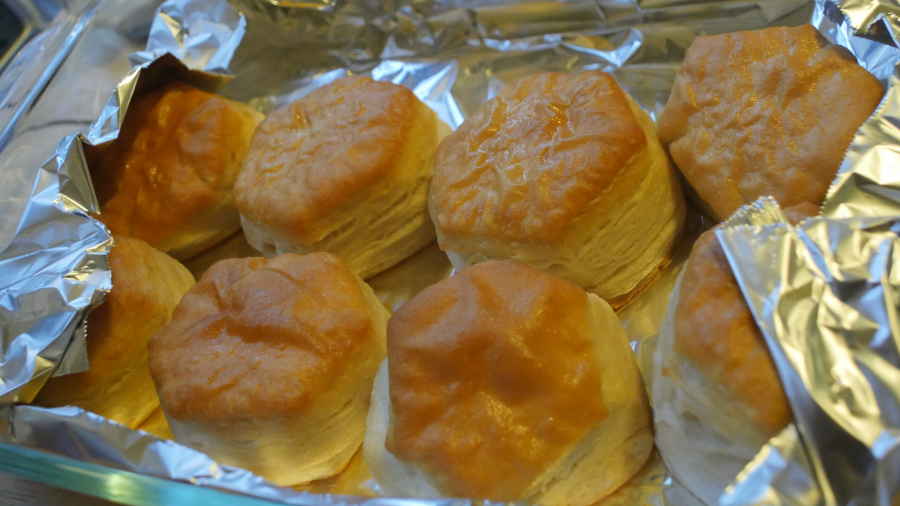 Slynn used Midel Vanilla Snaps for the cookie base of her banana pudding. She placed a layer of bananas over them and spread vanilla pudding and So Delicious Cocowhip! (the lite kind) over the top. She made her vanilla pudding with beverage-style coconut milk, vanilla, sugar, and corn starch. 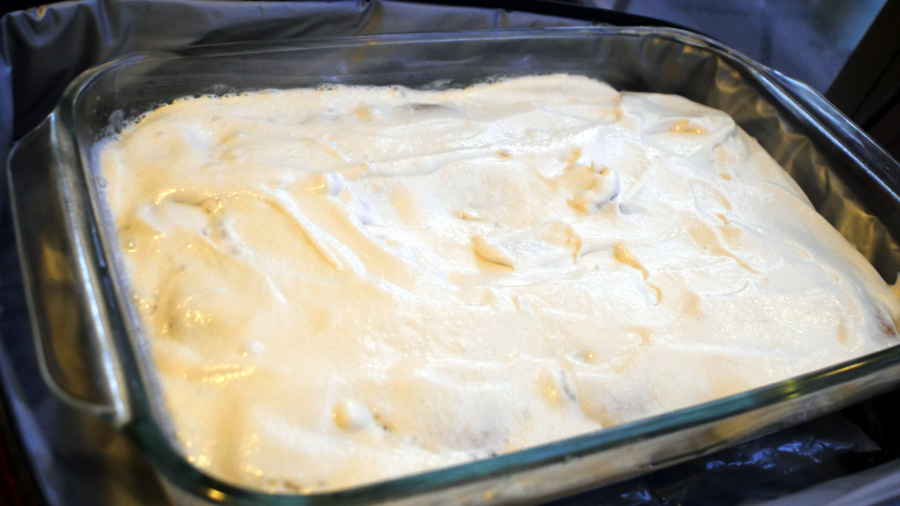 John went with making the easiest cornbread ever because it seems like a good idea to keep things simple when you break your arm flipping off a bike in Portland. He put corn meal, all purpose flour, frozen corn, and sugar into the batter. Because he didn’t want to go to store (got to keep it easy as possible), he used oil instead of butter and used water instead of non-dairy milk. He offset possible resulting flavor deterioration effects of the substitutions by supplementing more oil and salt. 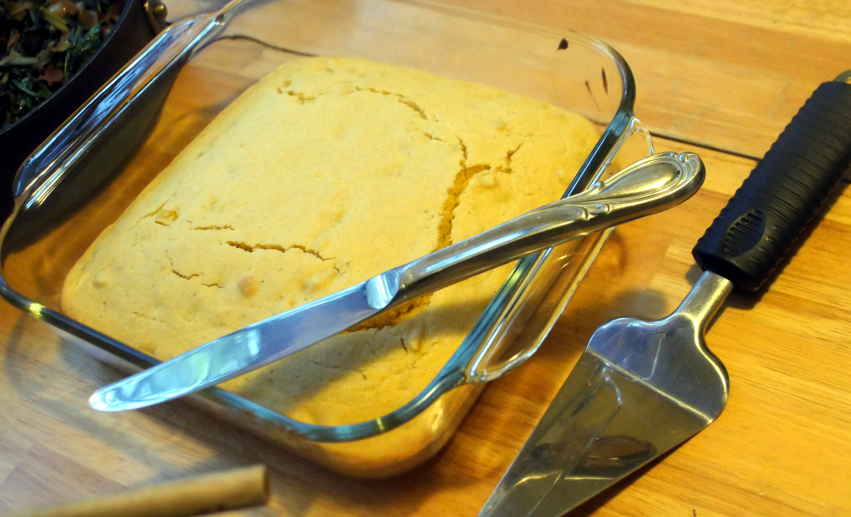 Lilly made an okra stew with lima beans, fresh spinach, jarred stewed tomatoes, and olive oil style Earth Balance. She cooked the stew in a sauce pan on low heat for an hour. She tried to make a barley accompaniment but it burned and tasted too smoky, so she prepared some rice instead and shallow fried some okra seeds for a garnish. 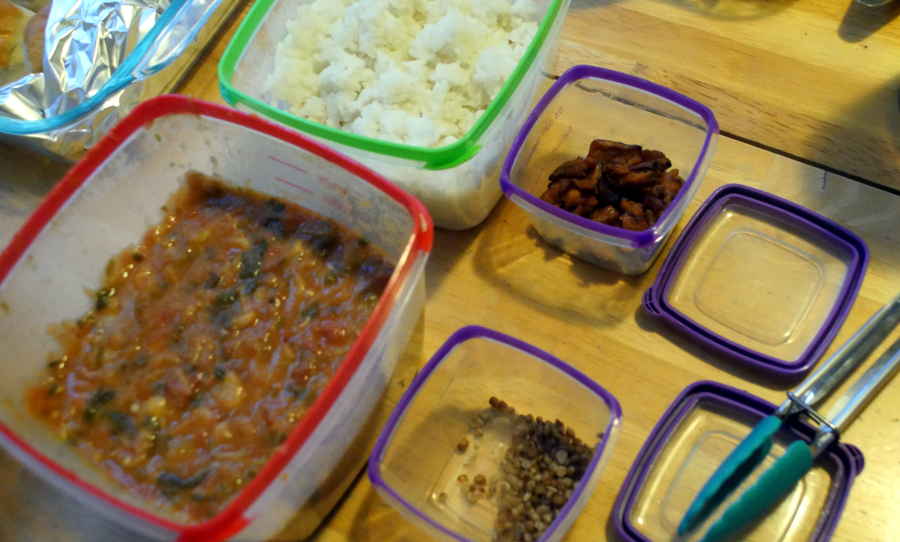 Here is a final look at the spread: 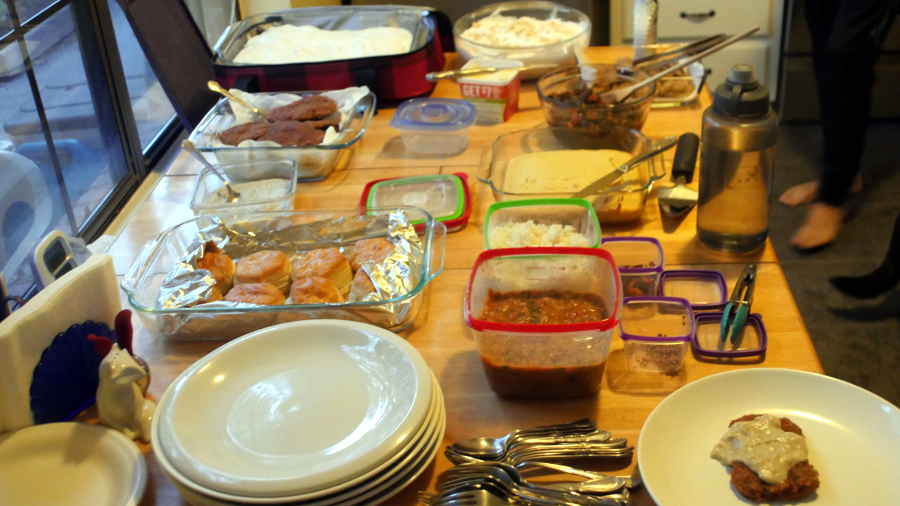